"The fewer people care about it, the more I feel I'm special"


Barcamp is always crowded of people. The last Barcamp Saigon (2012) is so boring (venue, topics..). But, this year, I gave it a try. I also decided to present about what I'm interested in, and what I'm working on right now, Django. Btw, I've just messed around with Django for 6 months, so do not expect something too advanced, I'm still a learner.

There're not so many people know about Django, but there're still some guys curious about that cool framework, more than i expected.

In this presentation, I just want to introduce people about the Django's architecture, and a practical example of building an Django web app. The main parts of my presentation are:


- It's a web framework written in Python programming language which means you can build great web applications using Python.

- Django is a MVC (Model - View - Controller) core web framework. But, the Django creators and developers interpret that concept as MTV which is stand for Model - Template - View parts of the stack. What is that mean? Why?

+ The model (M) in Django is responsible for defining the database tables, in Python code of-course. An example:

+ In a traditional MVC framework, the view usually decides how the data looks. But, in Django, the view (V) determines which data is presented, not how.

+ The template (T) is the part that decides how your data looks. 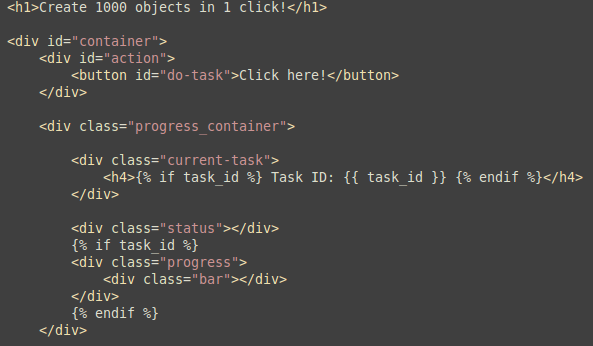 + In Django stack, the Controller is the framework itself  what is called URLConf. URLConf will do the mapping between users's request and the appropriate view:

- To build a Django application, we will follow some steps:

+ Inside your new project, run startapp:

+ Map users requests with your views in urls.py in myproject/myproject/

+ Run your development server by the command:


* Part 3: Something great about Django that I love

You can read some of my blog posts about Celery:


I use slid.es to create the html layout of the slides with reveal.js lib. I then integrated it into an Django app to present at the event. Here It is: