Showing posts from April, 2014
Show all

- April 29, 2014
Sometimes we cannot measure the progress or percentage completed of a job when using celery task (http://iambusychangingtheworld.blogspot.com/2013/07/django-celery-display-progress-bar-of.html). You can only say if it done or not by checking the status of the task. Here is a case, where the business code returns a failed result, but the task is still executed successfully. How can you tell? Luckily, you can use the result attribute of the task to get the return value of the business code. For example: Run the celery worker: celery -A tasks worker --loglevel = info Try to call the task which will return a fail result: >> from tasks import add >> job = add.delay(5,4) >> job.state SUCCESS >> job.result FAIL With this you can figure exactly what the result of the task is.
Post a Comment
Read more 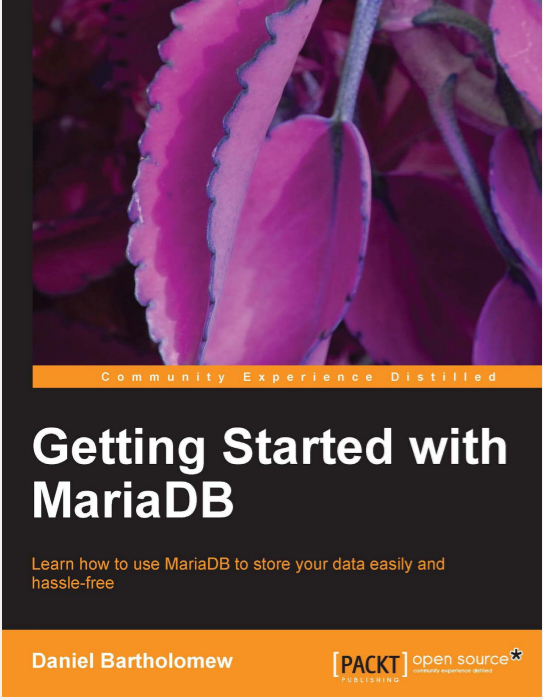 I guess we all know the famous open-sourced DBMS name MySQL. But since Oracle bought Sun Microsystem, the mother company of MySQL, people raises many concerns over the direction of Oracle, a commercial company. They'd already added some closed source extensions to MySQL and bug-fixes without any clear test cases. This attacks the nature of MySQL, an free open-sourced database. Because of that, Michael "Monty" Widenius, the founder of MySQL, decided to folk the source code of MySQL and started the MariaDB. Widenius built MariaDB as a "drop-in" replacement of MySQL but faster, more efficient, and stay open-sourced. So it's really easy for developers and DBA(s) to move to MariaDB. The people at MariaDB is also working on a separate branch of MariaDB with new features and design without any concerns about the compatibility with MySQL, MariaDB v10. But, if you want to stick with MySQL style, try to use MariaDB v5 instead. If you are a MySQL developer, a d
Post a Comment
Read more 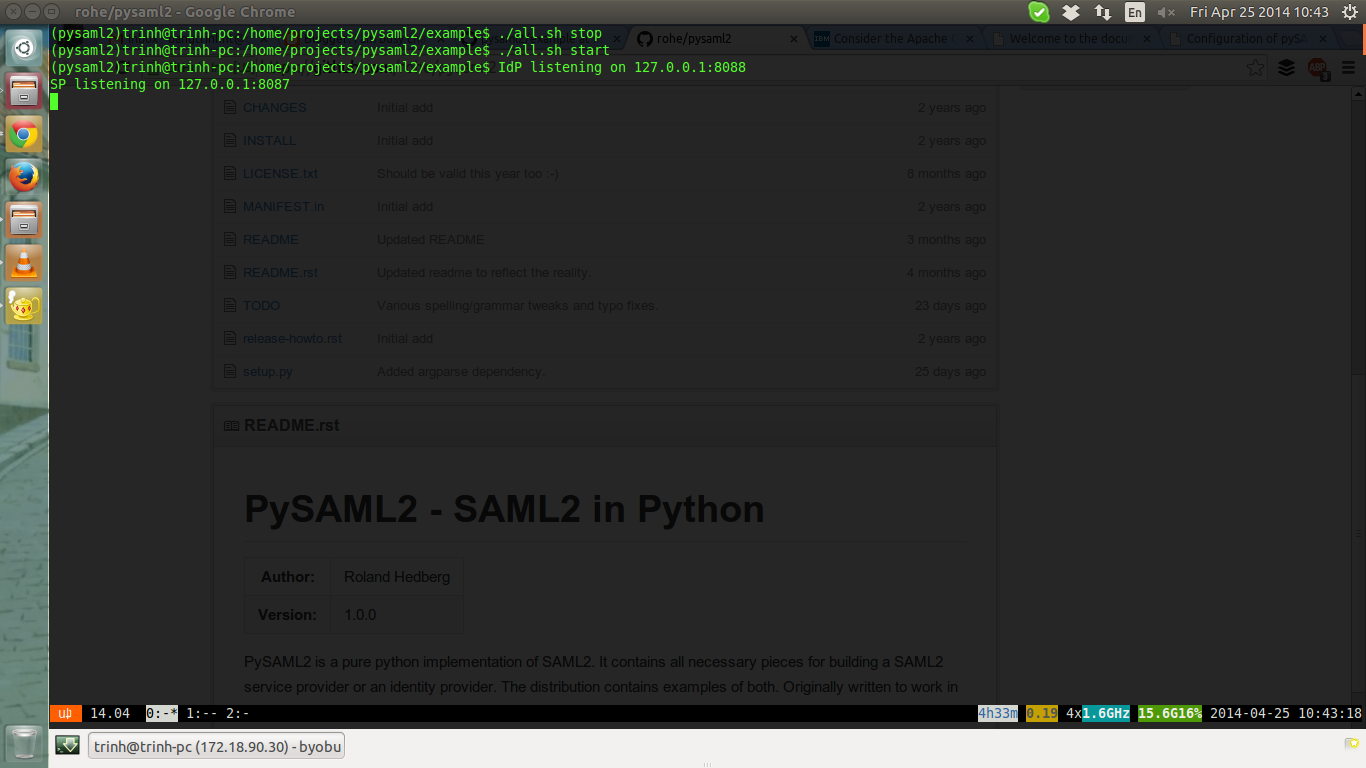 Getting started with Cassandra

Apache Cassandra™ is a massively scalable open source NoSQL database. Cassandra is perfect for managing large amounts of structured, semi-structured, and unstructured data across multiple data centers and the cloud. Cassandra delivers continuous availability, linear scalability, and operational simplicity across many commodity servers with no single point of failure, along with a powerful dynamic data model designed for maximum flexibility and fast response times. For more information about Cassandra's architecture, please read this documentation:   http://www.datastax.com/documentation/cassandra/2.0/cassandra/gettingStartedCassandraIntro.html If you want to give it a try without having to allocate a big amount of resource, you can use the pre-built Cassandra virtual machine which can be downloaded at  https://s3.amazonaws.com/planetcassandra-downloads/Cassandra-2.0.6.ova 0. First, there are some terms in Cassandra data model you need to know in comparison with Relational mo
Post a Comment
Read more

Install psycopg2 inside a virtualenv environment 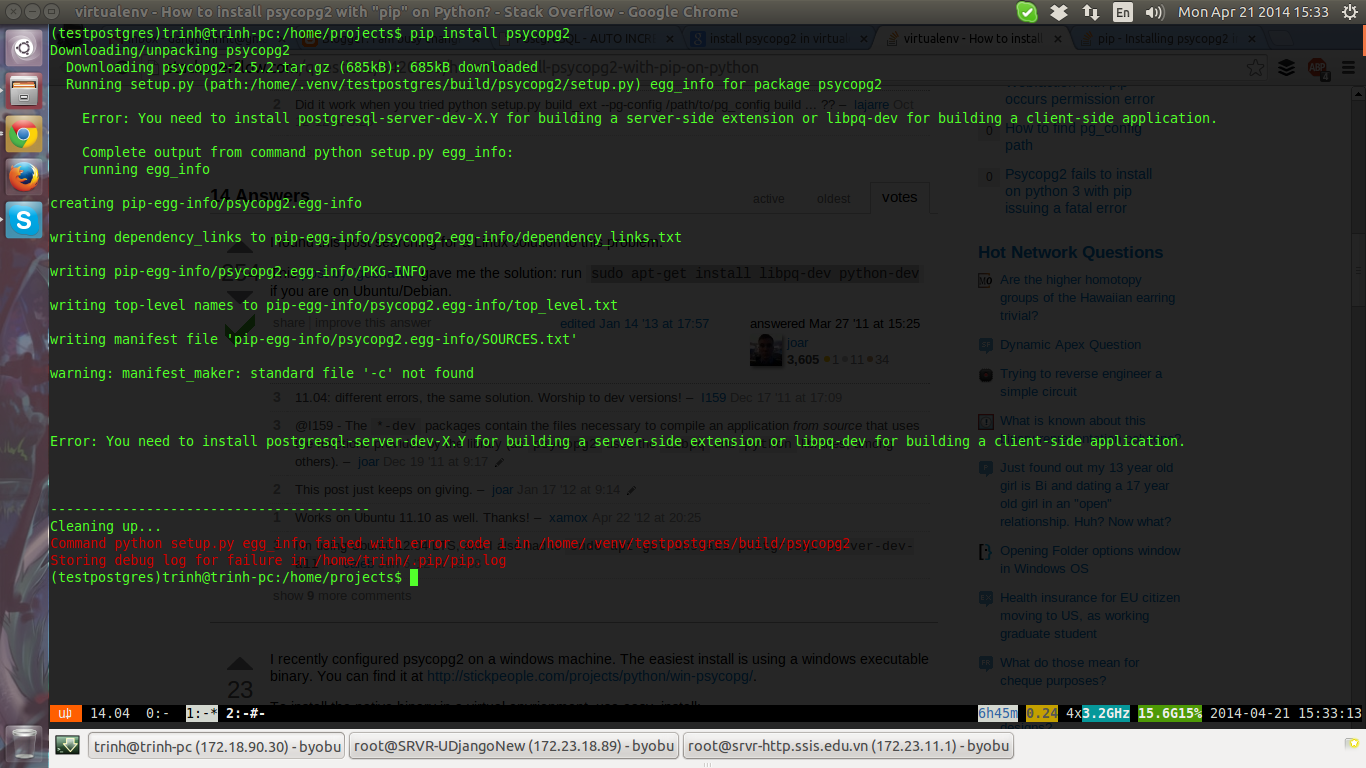 How to output raw html text with Django template

- April 18, 2014
By default, Django escapes or quotes all the text outputs in the template because of the security matter. It means that if Django template will render any html tag as text, not as html tag. But, if you want, you can display those html outputs as html tags using the Django built-in template tags: safe For example, I will return this object to the template with: myobject.mytextfield = '<strong>This is my text</strong>' + Without safe filter: {{ myobject.mytextfield  }} will be rendered as: "<strong>This is my text</strong>" + With safe filter: {{ myvar.mytextfield |safe }} will be rendered as: " This is my text " Reference:   https://docs.djangoproject.com/en/dev/ref/templates/builtins/#safe
Post a Comment
Read more

- April 06, 2014
I Love You by Chris Hart ねぇ 君はなぜ 哀しそうに うつむくの? Ne~ kimi wa naze kanashisou ni utsumuku no? Hey, why do you hang your head so sadly? まぶしいほど 青い空 なのに mabushii hodo aoi sora nanoni Even though the sky is dazzlingly blue いつからだろう? 君と手を つないでも itsu kara darou kimi to te o tsunai de mo When did it happen? Even when we were holding hands. ギュッと握り返してはくれないんだね gyutto nigiri kaeshite wa kure nain da ne You didn't tightly hold my hand back. 何を言えたなら あの日に帰れるの? Nani o ietanara ano hi ni kaereru no ? What could I have said to get back to that day? 胸を埋め尽くす不安だけが mune o umetsukusu fuan dake ga Only the uneasy feeling buried in my heart. 泣いても 泣いても 消えてくれないの naite mo naite mo kiete kurenai no No matter how much I cry, it doesn't go away. I love you I love you I need you ずっと愛されたいあの 頃のように I love you I love you I need you zutto aisaretai ano koro no you ni I love you, I need you, I want to be loved forever, like we were then. 叶わない願いでも この気持ちはいつもそうその胸に届 いていますか? kanawanai neg
Post a Comment
Read more

- April 05, 2014
It is an issue with Ubuntu 14.04 beta. I cannot listen any music or videos because the system showed no output device in the audio settings or just some dummy output. There is one way to fix that is to make sure my user is in the pulse and pulse-access group which provide access to audio driver. To see which groups I am in: $ sudo grep trinh /etc/group adm:x:4:trinh,syslog cdrom:x:24:trinh sudo:x:27:trinh dip:x:30:trinh www-data:x:33:trinh plugdev:x:46:trinh lpadmin:x:112:trinh trinh:x:1000: sambashare:x:124:trinh Add myself to pulse and pulse-access group: $ sudo usermod -a -G pulse,pulse-access trinh And now I can hear the sound again!
Post a Comment
Read more

Adding a transparent layer for a PNG image with GIMP

- April 04, 2014
To enable transparent layer for a PNG image in GIMP, you need to add the Alpha Channel to that image: >> Layer (menu) >> Transparency >> Add Alpha Channel Move created layer to below the image and you can adjust, delete or modify parts of the original image to show the transparent background.
Post a Comment
Read more 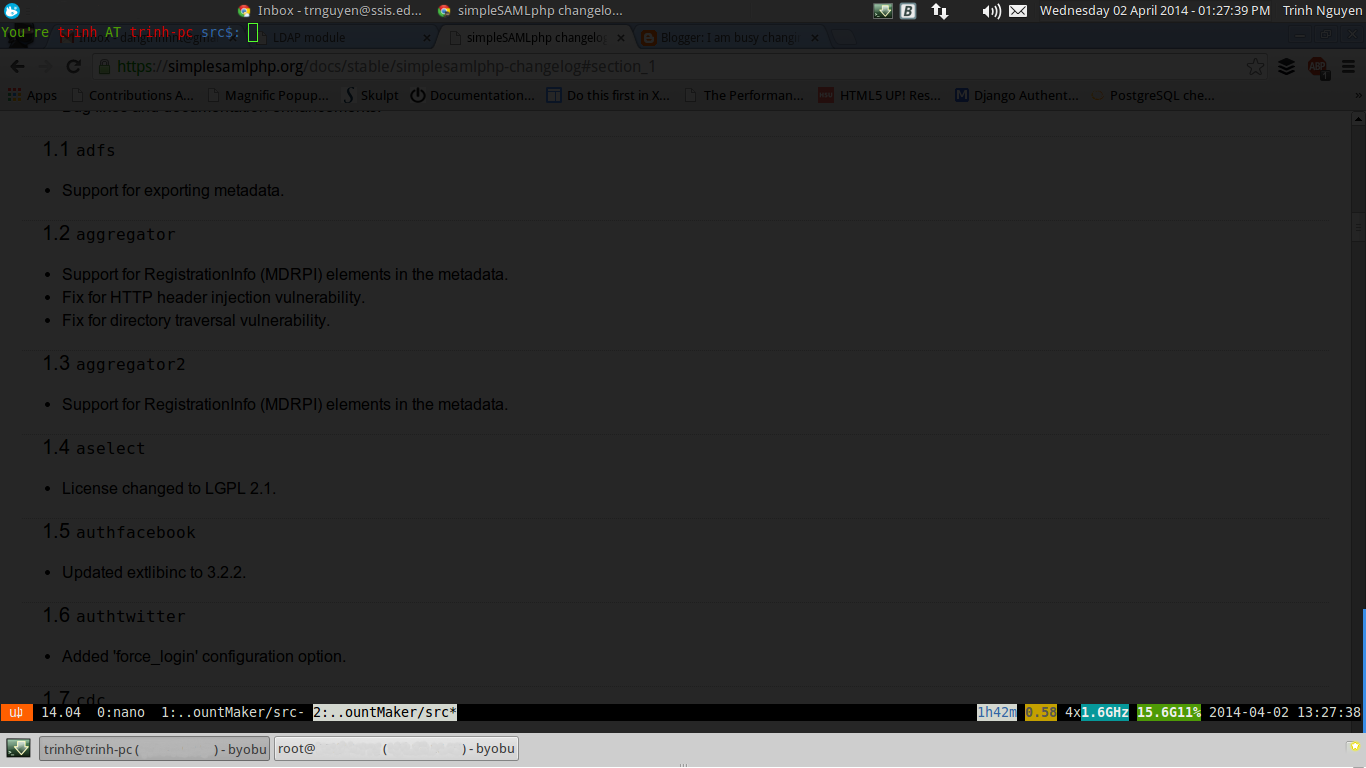 ZSH shell is a Unix shell comes with a lot of improvements compare with the bash shell. I want to try this shell in my computer since I was pleased by the new experience I had with ZSH in one of my DigitalOcean VPSs. 1. Install ZSH shell: $ sudo apt-get update && sudo apt-get install zsh $ wget –no-check-certificate https://github.com/robbyrussell/oh-my-zsh/raw/master/tools/install.sh -O – | sh $ chsh -s /bin/zsh => Restart the computer 2. Customize the prompt's display of zsh as following: to make it's easier to work with long directory paths Modify the ~/.zshrc : Apply the changes: $ source ~/.zshrc References: [0] http://www.zsh.org/ [1] http://en.wikipedia.org/wiki/Z_shell [2]  http://www.bash2zsh.com/essays/essay1_file_manager.html [3]  http://monangik.wordpress.com/2011/04/21/install-zsh-shell-on-ubuntu/
Post a Comment
Read more
More posts